A spring for the world of today and for the Church?

Newark 27.04.2015 Juan Pablo Pezzi, Mccj After two years, the World Social Forum (WSF) returned to Tunis. Four years ago, January 14, 2011, Zine Al-Abidine Ben Ali had fled Tunisia and the Arab Spring seemed to win in. That was the atmosphere two years ago. This year, on the contrary, instability and violence blew across many countries in North Africa and the Middle East. Yet, walking in the streets of Tunis and talking with the people at the hotel and with taxi drivers, the impression was that there was more peace, openness, freedom then two years ago. 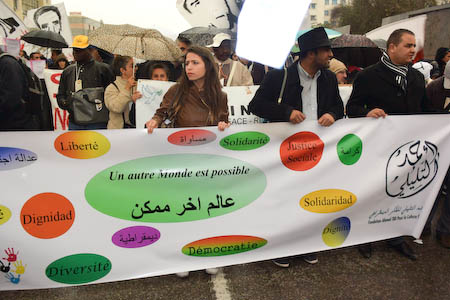 Traveling to the airport, the taxi driver points out to me a beautiful and slender, young policewoman and comments: "The first African woman to pilot a commercial jet was a Tunisian" - a sign of the process of emancipation of the young people and of women.

Tunisia is not an Arab country.  Of Berber origin, placed as it is on the shore of the Mediterranean Sea, for centuries it assimilated the Roman culture. Later it was dominated by Islam between 647 and 663. So I was not surprised that the Forum here always receives an open and friendly welcome. Following the terrorist attack at the Bardo Museum, our presence was a sign of peace and hope that the government was wisely exploiting to show it repudiation of terrorism.

I relived the memories of the five FSM I attended, and some things emerged that are worth mentioning.

Despite the multicultural frame of colors, rhythms and dances, the presence of North African peoples was too dominant. What saves the “World” mention in the title was the presence about 1,500 workshops run by groups coming from a hundred countries. On the other hand, compared to two years ago, the participation of sub-Saharan African countries was more noticeable.

Today, people of the world are worse off than when the first WSF was held in 2001. Wars, terrorism, inequalities make our society more and more inhuman. The number of people in poverty is multiplying, everywhere. Perhaps this is less evident in Latin America where there are no open wars, but where just the same people's lives are threatened continuously by social conflicts. The economic powers are increasingly organized, always one step ahead in civil society while opposition forces, that have always relied on leftist ideologies, appear fragile, divided, and a bit lost.

Youth movements and protests know perfectly well what they do not want, but not what they want.

The Forum is nowadays one of the few public spaces in the world able to rally the social organizations, the youth, the forces of civil society. In the WSF all the movements both from the south and of the north of the world can express themselves freely on the different issues: from the defense of human rights (of women, migrants and minorities), to the environment and climate; from alternatives proposals to the neoliberal system, to spirituality and interfaith dialogue.

The fact that the event is self-managed is beautiful and important, but it is also its weakness. The initiatives that are born here are countless, but often repetitive and they reveal the inability to communicate and make a common and convergent journey. It's an exhibition of ideas, initiatives and proposals often wonderful, but that lacks a clear departure point from the previous WSF. Thus each Forum seems to start from scratch and  never take any step foward. Being able to keep the style of a great, free, creative, proactive gathering and at the sametime ensure continuity is a challenge already perceived by many, but not yet put on the table.

For several years, in conjunction with the World Social Forum, a Theological Forum has also  been held, marked, as one could easily imagine, by the Theology of Liberazion (LT). I attended it, at least partially, on two occasions, but not this year. This time in Tunis a Benedictine monk, Marcelo Barros, spoke and confirmed me on a couple of ideas.

The first idea, which is also supported by the pastoral and missionary experience, is that today all theology must be inserted in reality, open to the world, able to clearly formulate the questions the reality suggests often confusedly, without claiming to provide definitive answers or formulations.

The different Forums have kept as their content the building of "another possible world," starting from the various struggles for justice, peace and stewardship of creation. But - Marcelo maintains - they have also created a new culture of the left, not based on the rigidity of the Marxist codes or on the discipline of the class struggle, but on a political culture of the encounter, on the joyous feeling of being brothers and sisters, on free expression of emotions and sentiments, on sharing dreams and motivations in the journey we are doing together. These elements are not possible without a spirit, a mystique, a spirituality.

Marcelo Barros then turned himself loose in describing what for him is the "new" spirituality of the WSF: "The WSF is like a universal church (assembly), which is secular because it gathers the impoverished, but has a transcendent hope. The Forum is not 'World' only because it brings together the people from around the world, nor because it seeks to build another possible world, but because it considers it possible to follow this process as a mystical universality and a transcendence that it is not religious, but secular and historical (...). We Christians believe that, as all spirituality, this one too is a journey inspired and led by the Spirit of God. It shares the same beliefs of liberation theology."

His views, it seemed to me, are a bit naive and forcibly inclusionary, and betray a question I have asked several times to myself in the 20 years I spent in Latin America, just in the most exciting and engaged period of LT. The choice of the Marxist analysis was perhaps due only to the lack of anything better, rather than a ideological wedding. However, was not this choice the mistake that explains the current weakness of the LT?

Actually, in a meeting Marcelo himself suggested using a new method: seeing, judging, acting. Perhaps he forgot that a priest, Joseph Cardijn, and two laymen, Paul Garcet and Fernand Tonnet, had proposed this methodology to the Young Catholic Workers (JOC) in France during the 1930s. It is to be hoped that, freed from an analytical method perceived as Marxist, LT will be welcomed even in Church circles so far unwilling to do so. It would enrich them.

The same Marcello conceptualized these values ​​reminding us that salvation is historical and takes place in the here and now, as social and political liberation, with internal and personal dimensions, as well as cosmic ones. It is the utopia of the "kingdom" that we invoke praying, "your kingdom come" here and now. It is a divine action in process that supposes our witness and our participation. The social and political processes that seek justice, even if partial, are mediations of the "kingdom," whose essential dimension is to be Catholic, that is, universal and ecumenical.

The Comboni family was present in Tunis as Comboni Network for Justice and Peace, with one of the most representative and international delegations: 37 members, working in 15 different countries. We discovered ourselves to be in progressive harmony with the commitment of civil society organizations in different parts of the world and with our ongoing effort to update the Daniel Comboni Plan. Our presence at the WSF in recent years had been progressively qualified: we began to organize workshops inspired by our missionary experience and, albeit still too limited, to share activities and treads with the groups we network with. In some cases, the representatives of these groups have recognized and praised our missionary work.

In continuity with the discernment made in the four previous Comboni Forums, we committed ourselves to: support and develop the liberation from today’s forms of slavery, especially human trafficking in persons; the defense of migrant rights in the context of human mobility; the journey of reconciliation and dialogue in countries affected by war; the defense of creation and of the common good thinking of the victims of environmental injustice and by reviewing our lifestyle.

Our stand has been an important tool for missionary promotion witnessing the Christian commitment to change jointly all that destroys life. It was a joy and, at the same time, a provocation to see the reaction of many young Tunisians who were impressed by our internationality, by the literature and dialogue we shared at our Comboni Justice and Peace network stand. Several of them asked us repeatedly: "So why are you not present also here in Tunisia?"