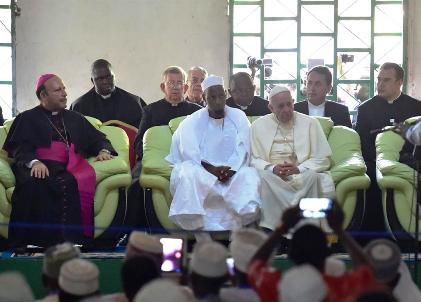 "If you're not able to take me, give me a parachute,” Pope Francis said to those who wanted to dissuade him from going to the Central African Republic: in this poor country, exhausted by violence and wars between ethnic groups, the Pope wanted to open the first Door of Mercy. The 36 hours he spent in Bangui, the capital, were intense: he met with authorities, visited the refugee camp near the airport, talked with young people, opened the Holy Door, and held Mass at the stadium. But the most intense moment was his visit to a mosque where he met with the Muslim authorities in a country that is bleeding because of violent clashes between Muslim and Christian militias. These clashes exist, not for religious reasons, but because of many varying interests. The day of the Pope's arrival, two Christians were killed in the parish "Our Lady of Fatima,” run by Comboni missionaries in the Muslim quarter, where the mosque, Koudoukou, the Pope would later visit is located. The Imam, Moussa Tidiani Naibi, dressed in white, welcomed the Pope to the mosque. He accommodated the Pope on a couch and sat next to him. "My pastoral visit in the Central African Republic would not be complete if it did not include the meeting with the Muslim community," Francis said. "Together, we reject hatred and revenge, say no to violence, especially that which is perpetrated in the name of religion or God. God is peace, God is salam.” Then the Pope asked to go in front of the mihrab, the devotional center of a mosque: there he was silent, prayed for a few minutes. As a gift he received a tablet engraved with a verse from the Quran: "If you find people more willing to love, these are Christians." A striking phrase spoken by Muslims? Not really, if you only remember that when Muhammad was expelled from Mecca, a large part of this first community took refuge in Ethiopia where Christians were living. Francis, without distinguishing between the many wounds that afflict the country and without making judgments against those responsible, highlighted the experience and the dialogue between Christians and Muslims. "In these dramatic times," he said, "Christians and Muslims religious leaders have wanted to stand against challenges. They have played an important role in restoring harmony and brotherhood among all. We can recall the many gestures of solidarity that Christians and Muslims have had with their compatriots from other religious denominations, welcoming them and defending them during the latest crisis in this country and in other parts of the world."

And today a quiet revolution in the Islamic world is kicking off. With demonstrations, perhaps superficial, "Not in my name", come together deeper reactions. For example, a group of Muslims, including feminist journalist Asra Nomani, is calling for a new movement: “We are Muslims who live in the 21st century. We stand for a respectful, merciful and inclusive interpretation of Islam. We are in a battle for the soul of Islam, and an Islamic renewal must defeat the ideology of Islamism, or politicized Islam, which seeks to create Islamic states, as well as an Islamic caliphate. We seek to reclaim the progressive spirit with which Islam was born in the 7th century to fast-forward it into the 21st century. We reject interpretations of Islam that call for any violence, social injustice and politicized Islam. Facing the threat of terrorism, intolerance, and social injustice in the name of Islam, we have reflected on how we can transform our communities based on three principles: peace, human rights and secular governance. We are announcing today the formation of an international initiative: the Muslim Reform Movement.”

Meanwhile Abdennour Bidar, a philosopher and French writer, who has published Plaidoyer pour la fraternité and Lettre ouverte au monde musulman, nourishes the hope of an Islam open to modernity and deep spirituality. "The Muslims own reactions when expressing their rejection towards Daesh are necessary and beneficial. But they are not enough. It is not enough to say that let’s not equate Islam and Islamism. Muslims around the world must move from a legitimate defense reaction to responsible self-criticism. [...] In fact a whole culture [the Muslim one] is threatened by the regression toward obscurantism, dogmatism, neo conservatism, and a rigor incapable of adapting to the present and to societies of different contexts. [...] It is a cancer seeing which clairvoyant Muslims suffer as they witness how their religion is degenerating. [...] The task is that everything should be done, everyone in their respective level and within their means, in order to regenerate, reinvent, transform this endangered spiritual culture. And for that to happen, the first thing to be understood is that we should stop just saying this is not the true Islam, this obscurantism is not the Islam of my grandparents, of my village or of the golden age of Islam, like the Andalusian Spain". [...] Nothing is more sterile than wanting to build the future with the past! [...] What is the responsibility of the Muslims in European societies? They must commit massively, not only as believers of a religion, but as citizens to participate in the common moral and social progress, and in the reconstruction of a fairer and more fraternal Europe -- against wild liberalism, against inequality between rich and poor, against the anti-spiritual materialism of our societies. If Muslims in Europe are involved in all these battles, they can make their voices count, and perhaps build an identification model with the Muslim culture that is neither turned in on itself, nor defending its identity and interests, but rather open and engaged in the logic of contributing to the common good."

These are nice and enlightened words, but they are not easy to implement. It’s true: reading the Book of Maccabees in the Old Testament is like reading a newspaper report about Isis. It's true: the Hindu resurgence in India is no less extremist or lighter than Islamism.  But the Old Testament saw its sacred idols of absolutism destroyed by the gospel of Jesus: an internal fracture that brought us through the dark times of a Christian civilization imbued with lust for power and dominance to a Pope like Francis. Hinduism had also its internal rupture with Buddhism that has paved the way "to regenerate, to reinvent, to transform a sinking spiritual culture." In the Koran the culture of submission to Allah and mercy overlaps and intersects with the historical experience of jihadist violence: only an "Islamic modernism" with a literary criticism will be able to separate the two Koranic visions and show that the two faces of Islam - a submissive faithfulness to Allah, and the political and military movement eager to dominate the world with religion - today have no reason or space to continue to coexist.

Outside the mosque, Francis spent a time among the tents of a refugees group and visited the Koudoukou school, where young Christians and Muslims study together.  He seems to tell us:

it is not enclosing on ourselves, but being open to a mutual acceptance that we will change our heart, change the world and allow Islam to find its way today.